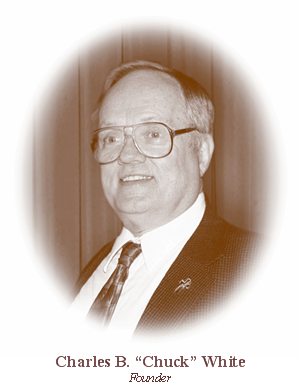 On Pentecost Sunday of 1984, Charles B. “Chuck” White announced from the pulpit at Saint Luke’s Church that he was looking for another job to supplement his income from his part time work in Ministry for the Diocese of Norwich.  William McMillen offered Chuck a partnership in starting a company to do printing for WordCom, a direct mail company.  At first, WordCom was the principal customer, but then the company began to grow as it acquired several new, diverse accounts.  Bill McMillen passed away a few years later, and his wife Karen later became a partner.  Chuck and his wife Carol became the owners.  After a period of financial hardship, the company finally began to flourish through the efforts of Dick D’Avanzo, a friend of Chuck’s who generously offered his business expertise, loyalty, and prayerful support.  In the mid 90’s, the Ellington Printery purchased MedPrint, a company that specializes in providing customized forms for the medical field.  This acquisition proved to be a wise business decision that has provided both diversification and stability for the business.  The work of Keith Poirier, MedPrint’s sales manager at the time, also greatly facilitated this time of growth.  It was also within that era that Element’s Design Studio was purchased.  With this as a resource, the Ellington Printery was able to diversify to more fully serve its customers.

Ellington is a classic New England Farm town.  As you enter the town from any direction, you’ll drive by breathtaking views of cornfields, dairy cows, apple orchards, and sheep pastures.  The center of town features a picturesque array of historic buildings, quaint gazebos, and scenic walkways… including one path that leads directly to the original home of the Ellington Printery at 31 Main Street and then at 33 Main Street, between Arbor Park and the Ellington Fire Department.  The town eventually purchased the property upon which both buildings are situated and, in 2001, it was necessary for the business to relocate.  The timing was perfect, as a new facility with expanded capacity was much needed.   The Ellington Printery moved to 77 Meadow Brook Road in a spacious building surrounded by the tranquil scenery of Ellington’s beautiful farmland.  Less than one mile away is the Circa 1878 Ellington farmhouse where the company founder Chuck White and his wife Carol raised 11 children!  In the Spring of 2012, Chuck’s son Carleton, with a passion for progress and efficiency, decided that the business was due for a change.  After several months of planning, calculating, contracting, arduous labor, and overcoming seemingly endless technical difficulties, the Ellington Printery finally settled into its new home at 25 West Road in what was once a barn extension of an 1800’s home.  This current facility has allowed the company to have more walk-in business with its greater visibility on Route 83, a charming storefront and reception area, and a more efficient workflow due to the custom-designed floor plan and climate-controlled production space.

With its loyal staff and outstanding facility, the Ellington Printery has an ongoing commitment to growth, service, and discovering new ways to accommodate the needs of its customers.  As new print technology is introduced, equipment is regularly updated to keep up with current trends.  Most importantly, the Ellington Printery is dedicated to establishing and building mutually beneficial relationships with its customers and suppliers.